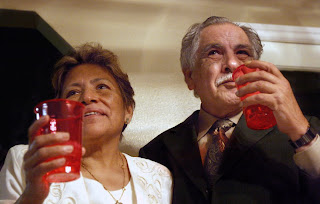 I can't imagine doing anything for 40 years (mostly because I'm only 35), but that's how long my parents have been married. Since then they've spawned three children who have so far spawned four more. These two people are now responsible for another SEVEN plus themselves. You want to know why we have a general over population issue? Talk to them.

Other things which have happened since these two got hitched:

Pops is looking sharp! I miss your parents.

Yeah Pops looks fantastic. No teef though. Moms is looking good herself I might add.

You should come to the next bbq, they'll trip!