I think this sign is trying to ruin me. 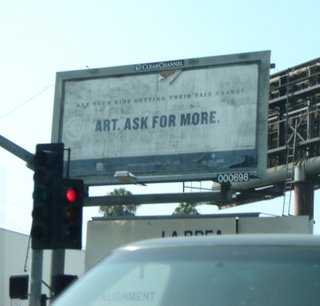 When I was ten years old I decided to play basketball. I had already conquered baseball and soccer, basketball was the next natural step. As luck would have it, one of my baseball teammate's father was the coach. He picked me for his team, he was doing me a favor; I was terrible at basketball. Now this guy's dad was one of the few white people still left in South Gate at the time, their numbers were minuscule really. Anyway turns out coach had a little trouble saying Arturo and quickly asked me if it was okay if he call me "Art". To be honest I hadn't had a nickname before that that wasn't a veiled insult. Up 'till then I had been called R2-D2 (this is a "clever" play on words in Spanish), "Artuna", "tuna", "tuna-fish", and lastly the logical conclusion of it all, "fish". And by the way I still resent them all, I'm glad to finally get that off my chest. So "Art" was a welcome change. Later on that year we moved, and that kid who was on my baseball team, whose father was my basketball coach, was in my new fifth grade class. His name was Casey by the way. Since everyone on my basketball team knew me as Art and Casey was also in my new fifth grade class, well it was at that very moment that I ceased being Arturo to this planet Earth and I became Art, the new kid.

It's been 23 years and it's sunk in. I relate to it now more then my full name. When I see it, and I see it all over town, I always make it personal. "Art History" always cracks me up, as does "Mexican-American Art". My favorite by far was a T-shirt that read, "Art is the only thing left worth doing." So you can imagine my reaction when I saw this sign.

I pass it everyday.

Ask for more what? I have no idea. I've asked for more money, I've asked for more space and gotten a bigger apartment, I even broke up with a girlfriend because the sign said should have more. I spend my life trying to please this sign, yet all it does is stand there and judge me. "You need to ask for more because right now, as it stands, you're not good enough." I'm a good person, I do good things, I have a great job and by all accounts am successful but you think I need more. Let me tell you something sign, I don't want to ask for more. I like where I'm at and if more comes maybe I'll take it maybe I won't but I'll tell you what I'm not gonna do, I'm not gonna ask for "more". Who do you think you are anyway, up on your little perch? You're just a sign. A sign that I might add is getting weathered and dirty. Maybe you're the one that should be asking for more. More of whatever it is that makes signs attractive. A lot more of that stuff. But me, I'm through asking for more. So fuck you sign, I ain't listening to you anymore!

Maybe it wants me to ask for more liquid paper. What time do they close TARGET?