The Autumn of Apu

Apu: Well hello Mr. Homer, what brings you to my store?

Homer: Well Apu the softball team wanted me to talk to you.

Apu: Oh? What about?

Apu: Nothing to worry about Homer ol’ buddy, it’s just a dry spell. The balls

will start dropping and when they do you just watch that batting average of mine soar!

Homer: Well that’s just the thing Apu, you don’t seem to be hitting those hard line drives anymore, not like you

used to when you were…you know.

Apu: When I was what?

Homer: You’re gonna make me say it? Fine, when you were taking steroids alright!

Apu: I’m not doing it anymore. I swore I’d only use human growth hormones to heal from my elbow injury quicker. That was a long time ago.

Homer: Well it’s also been a

long time since you lead all catchers in the league in every offensive category.

Homer: There’s no reason you can’t have numbers like that again. All you have to do is take the drugs Apu, come on everyone is doing it.

Apu: What about my defense? That’s got to count for something. 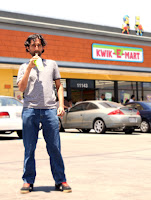 Homer: Listen, Nelson is in the wings, ready to take over for you at catcher if you don’t do something drastic here.

Apu: Nelson! I threw out 38% of would be base stealers last year. When has Nelson even come close to that?

Homer: It doesn’t matter man! He’s using HGH and you know what? -he’s hitting the cover off the ball. Homerun after homerun! The guy’s a machine who cares who throws out more runners! Look it’s this simple, get your numbers up or you’re out.

Apu: Please, don’t take this away from me. Playing catcher for the Springfield Isotopes softball team is my life!

Homer: Sorry, it’s out of my hands.

Homer takes a bite from his donut and turns to leave.